A wonderful and savory pot roast is a fantastic Sunday dinner. Pot roast is such a well-known dish in America; there are hundreds of recipes on the internet. But have you ever experienced a pot roast with mushy potatoes or even hard potatoes? Yikes! So what IS the best potato for pot roast? We’ve done a wide search of the internet and found the authoritative sources that explain which potatoes are the best choice.

The best potato choice for a pot roast relies on the potato's starch content and flavor. All-purpose, Yukon gold potatoes are generally the best choice for pot roast. Russet potatoes are too starchy to use; you will end up with disintegrating potatoes.

When trying a new pot roast recipe - or experimenting with your old one - the last thing you want is a poorly baked potato. This article will explain all you need to know about choosing the right potatoes for pot roast, when to add them, how to cut them, and the basic pot roasting method. Keep reading to prep for your roast! 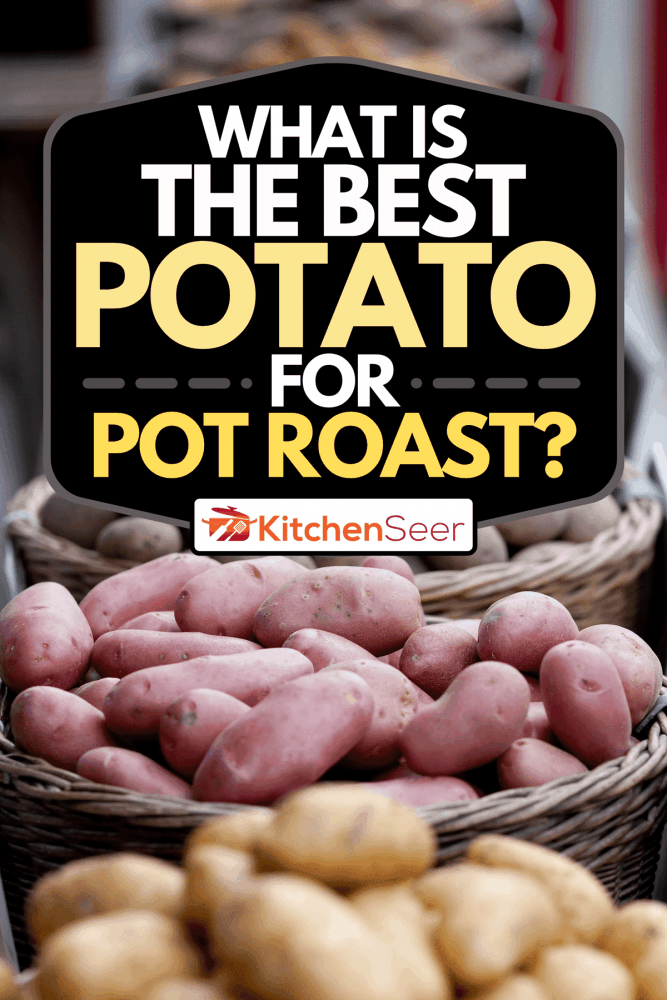 Potatoes come in so many varieties, and they come in many colors, shapes, and sizes. But the most important thing you need to know about choosing the best potato for pot roast is that some have a higher percentage of starch to water ratio. Many people categorize these differences as either floury, as in the case of Russet potatoes, or waxy, as in the case of small potatoes like French fingerlings and Luceras.

You can do a simple float test to determine how starchy your potato variety is by dunking a raw potato into saltwater to see whether it floats. If the potato sinks, it's high in starch!

Yukon golds are popular for pot roast because they fall somewhere in between waxy and floury; they are a yellow-skinned, all-purpose potato. They have a medium starch to water ratio and a nice buttery flavor. They also hold up well in roasting, hold their shape in a potato salad, and can be mashed with beautiful results.

The small French fingerlings and Luceras, have a buttery as well as an earthy flavor. Purple and blue varieties such as purple Peruvian have a nutty and earthy flavor. Red potatoes such as redskins and red bliss have a sweet and smooth flavor. All of these varieties hold up well in pot roast cooking.

If you want a more colorful and eye-catching pot roast, try a mix of colored potatoes. Use red potatoes such as red bliss or ruby. Yellow-skinned varieties such as French fingerlings and Yukon gold add a nice hue. Don’t forget to throw in a few purple potatoes such as purple Peruvian, purple majesty, or even Adirondack blue. 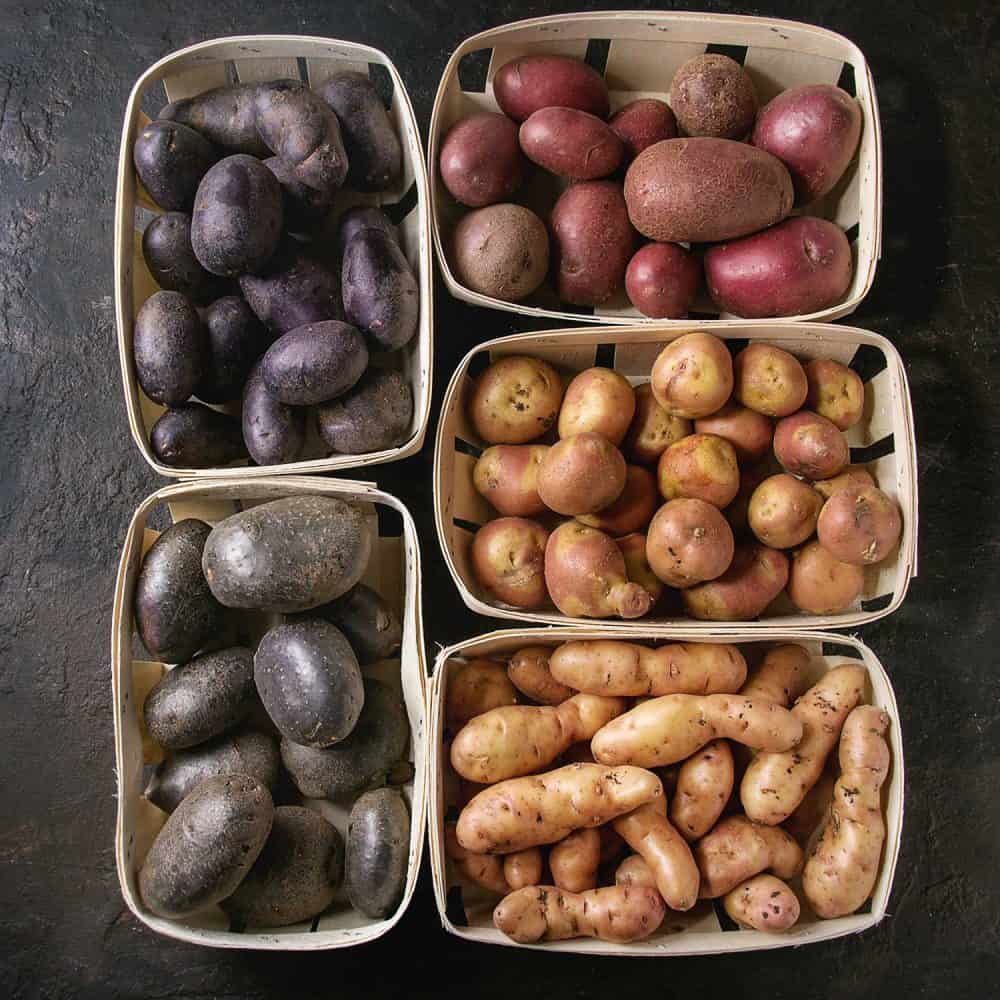 What is the pot roasting cooking method?

The pot roast was born from the need - or desire - to use tough cuts of meat. These types of cuts are chuck roast, brisket, or round roasts. The method for cooking them is relatively simple. The meat - usually about a three-pound roasts - is first seared on all sides. Then, a liquid is added along with some stalks of celery, bay leaf, garlic, black pepper, and onion. The meat is slow-cooked, and an hour or two before it is done, the potatoes and carrots are added.

Do you put vegetables on top or bottom of a roast?

The answer depends on what type of pan you will use. In a slow-cooker like a crockpot or a Dutch oven, put the vegetables on top: the potatoes should go under the carrots. Your vegetables will be cooking for a long time, and you don’t want them to overcook, so you want them far away from the heat source. Heat transfers to food faster via direct contact with the cooking vessel. Additionally, putting the vegetables on top helps to flavor the meat underneath, giving you a tastier roast.

When do you add potatoes and carrots to pot roast in crockpot?

Many recipes call for adding your potatoes and carrots to the crockpot for the last two to three hours of cooking. This is to prevent them from becoming overcooked. Follow the recipe and don’t make changes unless you are willing to sample the experimental results.

If you absolutely must add your vegetables at the beginning of the process - because you are leaving your crockpot for the day - you can place your potatoes and vegetables in a foil packet on top of the meat. Crockpots typically cook for several hours, so again, keeping the potatoes away from the main source of heat will help prevent overcooking.

Why are my roasted potatoes hard?

If you have cooked a pot roast, and your potatoes were hard, there are a couple of reasons why this may have happened.

The next reason your potatoes may be hard is if you roast your potatoes in the oven. You may have actually dried out the potatoes. Potatoes need steam or water to break down those potato starch molecules. Be sure to add water to the bottom of the pan and cover tightly with tin foil or a lid or your potatoes will not cook, they will simply dry out and become hard.

The last reason is a molecular reaction that can happen when cooking a roast with potatoes and tomatoes, or even acidic liquid such as wine. The starch molecules in potatoes will not swell and cook in acid conditions. You can experiment with this phenomenon yourself, by comparing the potato texture when boiled in plain water to acidic water with added vinegar. Which potato is firmer?

How do you cut potatoes for roasting?

Yukon gold potatoes can range in size, so cut them into pieces no smaller than a golf ball. Halved or quartered is perfectly fine. Do not chop them into small pieces, as they can overcook. If they are small potatoes like fingerlings, leave them whole. As for adding carrots to the mix, cut carrots no smaller than two-inch pieces.

When cutting potatoes - or any vegetable for cooking - be sure that all pieces are roughly the same size. This allows them all to be cooked through at the same time. For example, certain foods cook more quickly than others. A good rule of thumb is to add faster cooking foods later in the recipe or cut them into larger pieces so they take longer to cook. 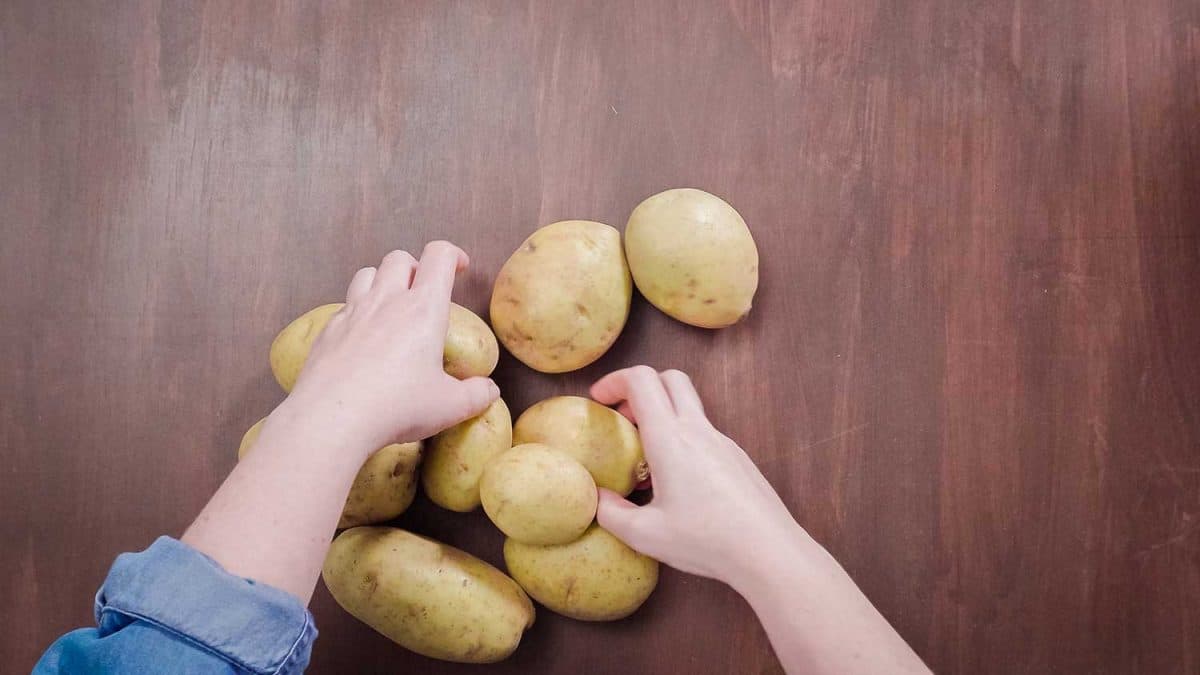 See the popular Yukon gold potato featured above; note the differences in size. Anything larger than your fist should be quartered for roasting.

Be sure to use either Yukon gold or another all-purpose variety of potato. Waxy type potatoes like French fingerlings and redskins also work well and keep their shape for pot roast. Make sure to put the vegetables on top of the roast, keeping the potatoes underneath the carrots, celery, and onions. The potatoes should always be a uniform size, halved or quartered is usually good for Yukon gold.

Verify the temperature of your crockpot and keep potatoes moist to ensure they become soft and delicious. Keep them on top of your roast to avoid overcooking and to allow the yummy juices to flavor your pot roast. Last but not least, if you decide you just don’t want to worry about potatoes and their myriad and fascinating cooking qualities in a pot roast, you can always make mashed potatoes instead!

For additional information about potatoes, read about "20 Types Of Potatoes Every Cook Should Know," and "What Potatoes Are Best For Stews And Soups? [6 Excellent Options]."

How Long Does It Take To Boil Chicken?