If you love donuts, as many people do, you've probably wondered how to have them fresh and hot at home. When you're contemplating making your own donuts, one of the most fundamental questions is which oil is best for frying them. Fortunately, we've done our research and can tell you how to create tasty deep-fried treats in the comfort of your own kitchen.

The best oil for frying donuts is anything with a neutral flavor profile and a high smoke point. Some oils preferred by amateurs and professionals alike include:

Why do neutral flavors and high smoke points matter? And why are these oils better than the multitude of other options? Keep reading to learn the answers to these and other questions about frying donuts at home. 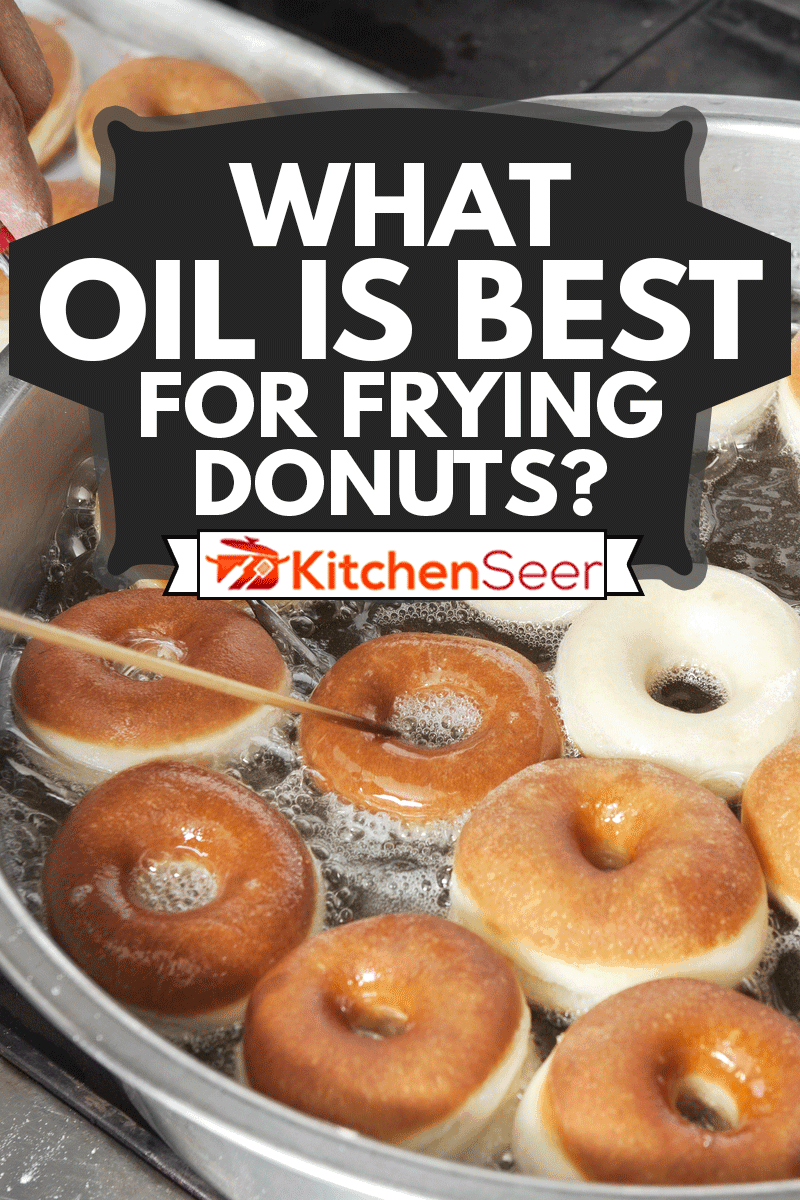 How do you fry the perfect donuts?

The first step to frying the perfect donuts is choosing what type of oil you will use. There are a few different considerations that should guide your choice:

A neutral flavor profile is fairly self-explanatory. If you use a strongly flavored oil, such as olive or coconut oil, your donuts will end up tasting like the oil! This is fine if you want olive or coconut donuts, but for any other situation, you will want an oil that will not impart its flavor to the dough.

Then there is the smoke point, which refers to the point at which an oil begins to smoke, shortly before the point at which it will catch fire. You want this to be high for a couple of reasons. First, the last thing you want when whipping up a sweet treat is a scary and dangerous grease fire! Second, if you heat an oil to smoking and then attempt to cook in it, your food could take on an unpleasant acrid flavor.

Donuts are generally fried around 375 degrees Fahrenheit. Canola, sunflower, safflower, peanut, and palm oil all have smoke points between 400 and 450 degrees, which leaves plenty of wiggle room. However, butter, olive oil, and coconut oil have smoke points around 350 degrees, so they could easily begin smoking before reaching optimal donut-frying temperatures. When frying, you should use a frying/candy thermometer to make sure your oil stays in the correct range rather than trying to guess.

You can find a deep fry/candy thermometer here, on Amazon.

Choosing an oil with a relatively low cost is optional but probably worth considering. Deep frying requires about three inches of oil in a pan that's large enough to hold a few donuts at a time without crowding. This can easily require a quart or two of oil each time. Many chefs recommend frying donuts in cast iron Dutch ovens, but any pan that's large enough to hold all the oil you need without the risk of spills and splatters will do the trick.

Click here to see this Dutch oven on Amazon.

Can you fry donuts in olive oil?

This is probably not a good idea due to the three reasons outlined above. Olive oil generally has a very strong flavor, which might be disagreeable when paired with the sweetness of donuts. It also has a relatively low smoke point. On top of those factors, olive oil tends to be significantly more expensive than something like canola oil if the price is a concern for you.

If you really want to fry in olive oil for whatever reason, choose a refined version rather than unrefined, or more commonly known as extra virgin olive oil. Refining olive oil strips out a great deal of the flavor and raises the smoke point, so it's a much safer bet for frying.

Can you fry donuts in coconut oil?

Coconut oil isn't the best choice for making donuts. While coconut flavor can go with sweet things, you might want donuts that have other flavors. Meanwhile, its smoke point means that your donuts might taste like burnt coconuts, a far less popular option for pastries. Coconut oil can also be relatively expensive.

As with olive oil, coconut oil comes in a refined version that is much better for frying if you really want to use it to make homemade donuts.

What kind of oil does Krispy Kreme use?

According to their FAQs page, Krispy Kreme uses vegetable shortening that is made from a blend of "palm, soybean, and/or cottonseed and canola oil." If you have access to a restaurant wholesale supplier, you might be able to find a similar frying oil blend. However, you probably aren't going to be making as many donuts as Krispy Kreme on a regular basis, so this might not be the best route to pursue.

How do you keep donuts from absorbing oil?

First, fry them at the right temperature. If your oil gets too cold, the donuts will cook more slowly, giving them soggy insides and chewy outsides. Make sure you don't overcrowd the donuts either, since this can cool down the oil too much and make the donuts cook unevenly.

Second, drain them after they're cooked. As soon as they're done, hold them over the pot in a slotted spoon for about 10 seconds. Then, set them on a bed of paper towels, which will wick away a lot of moisture. Once the towels have had a chance to absorb most of the oil, transfer the donuts to a wire cooling rack.

If neither of these tips helps, the issue could be with the dough itself. Overproofing - letting the dough rise too long before cooking - can lead to donuts that collapse and become soggy when cooked. To check for overproofing, just poke your donuts with your finger before frying them. If they retain a slight indentation, they're perfectly proofed. If they deflate, they're overproofed, and you will need to reshape them and let them rise again.

What to do with oil after frying donuts

Considering the large amount of oil you need to fry donuts, you're probably wondering if you can reuse it. The answer is yes. If it's stored properly, oil can be used two or three times before it goes rancid. Rancidity happens when oil interacts with oxygen in the air. This affects the taste and can also be bad for your health, so obviously, you want to avoid it. So here's how you store your oil for reuse:

When you are done frying, turn off the heat as soon as possible so the oil can begin to cool. Wait until the oil is cooled completely - the cost savings of getting it in a container a little bit sooner aren't worth burning yourself!

Next, strain the oil. Line a sieve with cheesecloth and pour the oil through. This will remove any little burnt bits that will make your oil taste nasty next time you heat it up.

Transfer to A Container to Store in a Cool, Dry Place

After you've strained the oil, you can use a funnel to transfer it to a glass jar or even the bottle the oil originally came in if you want to save yourself the trouble of washing another dish. Store the oil in a cool, dry place as you would with fresh oil.

Oil will take on the flavor of whatever you cook in it, so you probably don't want to use leftover oil from a fish fry to make donuts or vice versa!

Once the oil has reached the end of its usable life, don't pour it down the drain. This can lead to a massive clog when congealed oil combines with whatever else is lingering in the pipes. Instead, seal the oil in a disposable container - such as the bottle it came in, if you still have that - and throw it away. 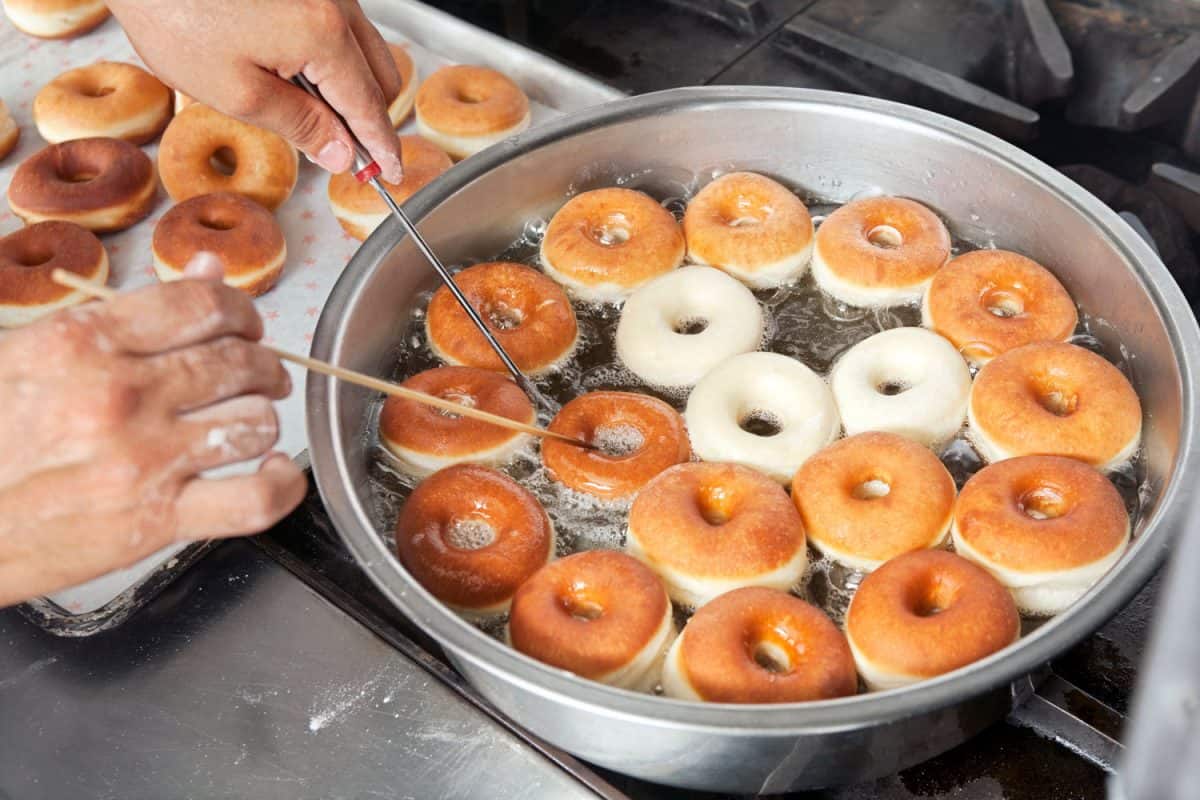 Donuts are a delicious treat that's even better fresh out of the frying oil. However, many home chefs are intimidated by what can seem like a complicated process. Now that you've learned how to fry the perfect donut, enjoy using that knowledge!

Interested in learning more about frying? Check out our related posts:

How Much Oil Do You Put in a Deep Fryer?

14 Types Of Flour For Pasta – Do You Know Them All?

At What Temperature Should You Bake Pie Crust?

Can You Proof Instant Yeast?