Pot roast is one of those comfort meals that always sounds good. The only thing that makes it sound even better is using an instant pot for cooking it, so the whole process is fast and easy! When making a pot roast, one of the biggest considerations is the type of meat to use. Also, if you've never cooked this meal in an instant pot, you may be wondering if that changes things. We have researched the best cuts of roast for an instant pot to help you make an easy decision!

Using an instant pot doesn't mean that you have to purchase a special cut of roast. Three main cuts are typically chosen. Any of these can be used for pot roast, but they all have their benefits and drawbacks:

You may end up with a tougher roast and need to know how to soften it up. You'll also want to consider how long you should cook the roast in an instant pot so that it doesn't become overcooked.

Cooking a roast in an instant pot is sure to be a quick family favorite! Before you choose a recipe and head to the store to grab any of these cuts of roast, there's more information that could help you. Continue below to learn everything you can about making a great instant pot roast! 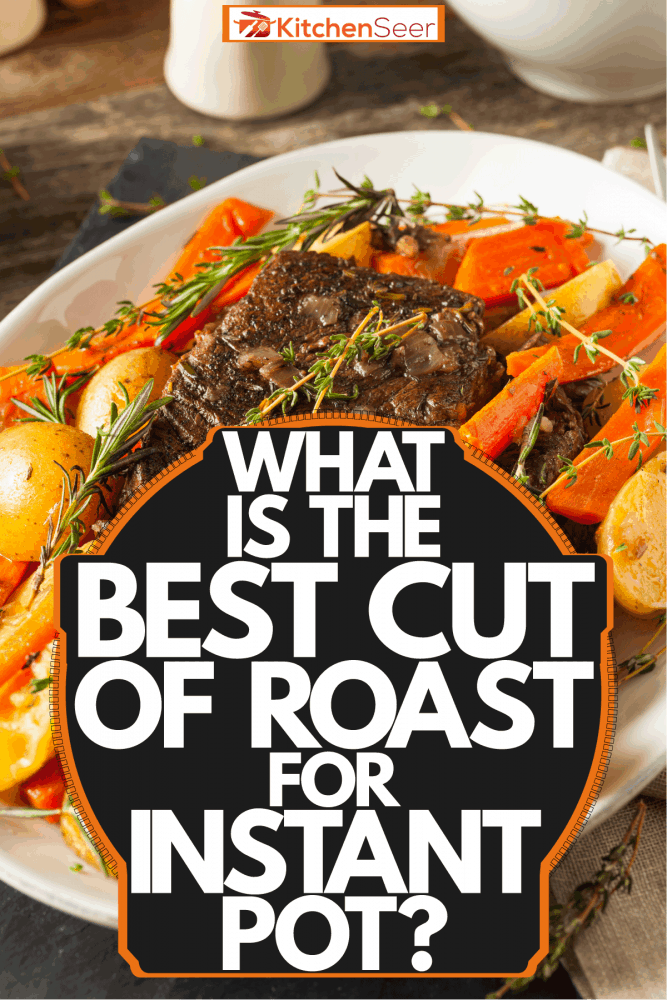 Choosing The Best Cut Of Roast For An Instant Pot

While personal preference might be the biggest factor for picking a cut of roast, there's more to consider.

You have to understand how each cut breaks down when cooked in an instant pot. Knowing this about all the possible cuts will help you pick the best one for you and your family! 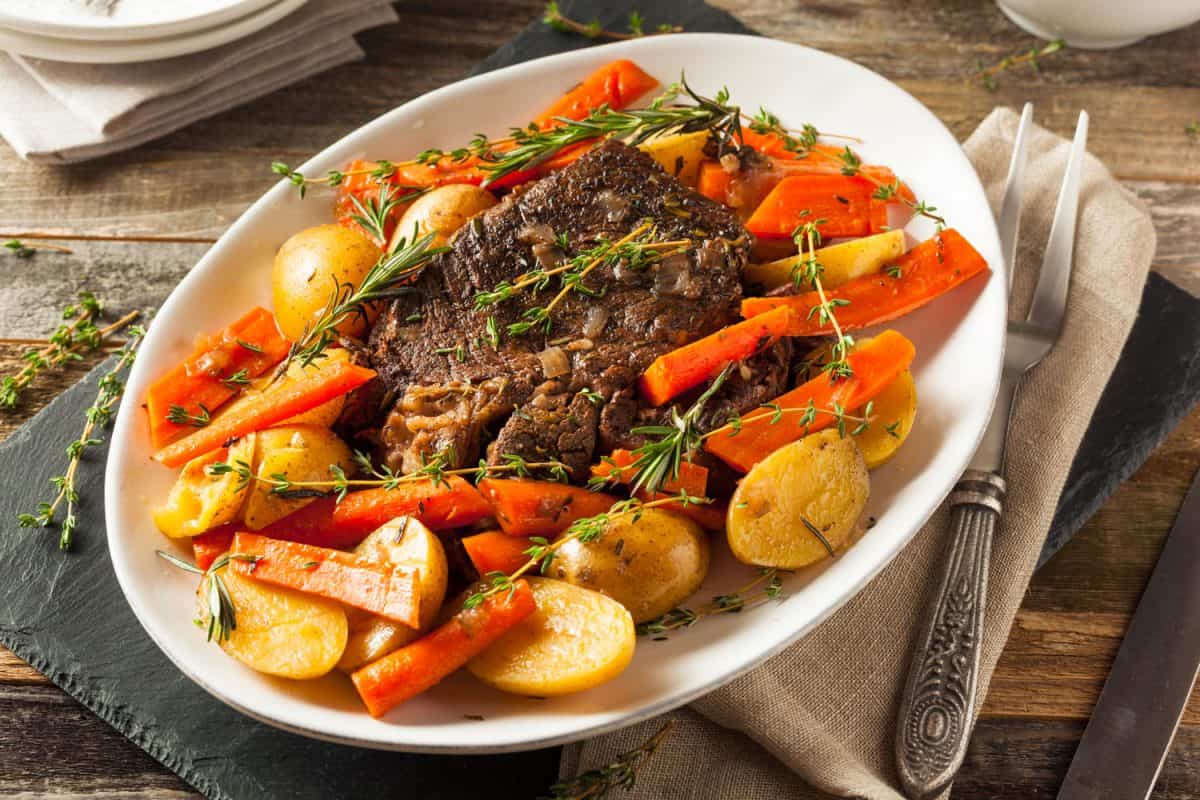 Chuck roast is a very traditional choice. This is because it is very marbled, which releases a lot of flavors while being cooked. When cooked properly, it also becomes incredibly tender in an instant pot or any cooking method!

Choosing this roast is a double-edged sword because all of the things that give it its advantages, like its fat marbling, also cause its disadvantages.

Chuck roasts tend to be very fatty. This means that you have to cut away the fat after cooking it. If you don't cut away all the fat, it can make chewing it unpleasant in places.

Getting rid of all of the fat also means that you're significantly reducing the size of the roast. It can also make the meal greasier than desired.

This cut is an excellent alternative to the chuck roast. Rump roasts can also be very tender when cooked properly. They also generally have far less fat than their counterparts.

This creates one of the most significant advantages of rump roast over chuck roast, which is that you don't throw as much of it away. Since there's less fat to discard, you get more bang for your buck.

When it comes to disadvantages, rump roast is more expensive on average. If you want a leaner cut of meat with a good flavor, you have to pay for it. It also doesn't turn out as melt-in-your-mouth as the chuck roast, but it is a close second!

Sirloin roast is less popular than the other two options, but it still has its advantages. Sirloin cuts have excellent marbling with fewer large chunks of fat. This makes it very flavorful, and you don't have to trim as much fat off.

This cut doesn't get as tender as the other choices, which is why this is one of its disadvantages.

However, it is still easy to slice, just not pull apart. It also tends to dry out fairly fast. Because of this, you may want some extra gravy or sauce to keep the cut moist after slicing or for leftovers.

Why Is My Instant Pot Roast Tough?

The main reason a roast cut would still be tough is that it isn't done yet. If it isn't as soft as you want it to be, then place it back in the instant pot and cook for a little longer until you achieve the desired tenderness.

This is also a benefit of using an instant pot because that extra bit of cooking will be faster than in another cooking appliance. Of course, the cut of roast you chose may play a factor in how quickly it gets tender.

How Do You Soften A Tough Roast?

The best way to soften up a tough roast is to cook it longer. You can keep checking on it until it reaches the level of tenderness that you prefer. You can also choose a softer cut like a chuck roast to help avoid this next time.

Does Meat Get Tender The Longer You Pressure Cook It?

Yes, meat does get more tender the longer you cook it this way. However, this isn't true with all forms of cooking appliances.

How Long Should I Pressure Cook Beef?

This depends on how thick the cut of beef is that you're cooking. One-inch cubes of beef for something like beef stew only take around 15 minutes.

However, many recipes call for cutting the roast up into 3-4 large pieces before cooking, so it cooks even faster!

Can You Overcook A Roast In An Instant Pot?

It is possible to overcook a roast in an instant pot. While cooking it for a little longer when it's tough will make it more tender; if you keep cooking it, then eventually you'll ruin it.

Overcooking roast in a pressure cooker essentially draws all of the juices out of the meat. The roast will start to dry out and get an unpleasant texture. It will also have less and less flavor the more you overcook it!

Is It Better To Pressure Cook Or Slow Cook Beef? 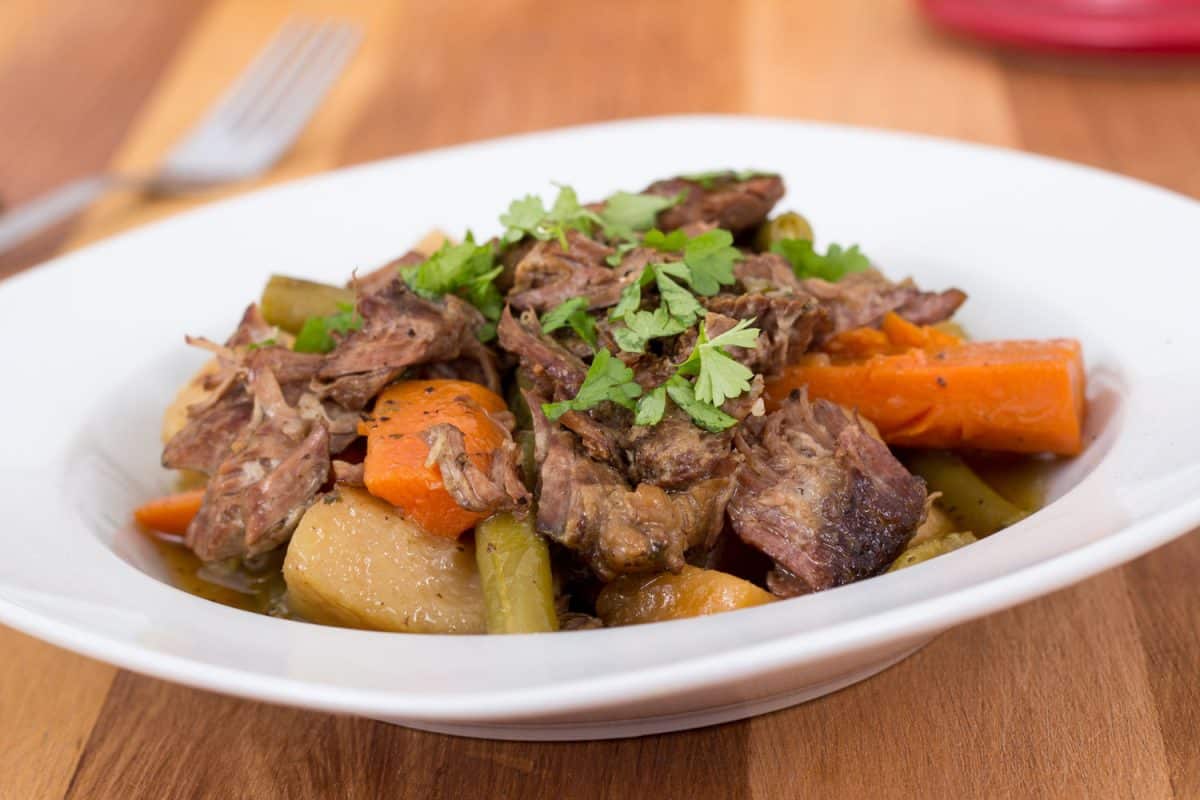 But slow cookers are still around for a reason. You'll have to take a look at the pros and cons of both to decide which is better for you!

Click here to see this pressure cooker on Amazon.

Click here to see this slow cooker on Amazon.

Pressure cooking's main advantage is that it is significantly faster. It only takes around an hour to cook a traditional slow cooker recipe in a pressure cooker.

That includes the time it takes for the appliance to get up to pressure and come down from it. You can cook a last-minute slow cooker recipe without worrying about preparation.

A slow cooker's real advantage is that it's low maintenance. You can put your ingredients in it in the morning, go to work, and come home to a delicious and ready meal! They both cook the foods to similar qualities.

The first disadvantage of pressure cooking is that you have to be present near the appliance during cooking.

It also cooks so fast that you have to be more accurate than with a slow cooker. Overcooking happens a lot more quickly in a pressure cooker.

Time is the biggest disadvantage of slow cooking. You have to have everything prepared and planned out 6-8 hours before you're going to eat the meal.

While slow cookers have more forgiveness when it comes to overcooking, it's still easy to forget about it and let it sit for another hour while your meal becomes mushy and bland.

One last disadvantage that they both share is how inconvenient they are to clean!

Whichever cut you choose, just make sure to cook it for the appropriate amount of time.

If your roast is still tough, you can continue to cook it, and it will become more tender. Just make sure to do the extra cooking in increments, so it doesn't overcook and dry out.

Now that you've learned all of this, it's time to try out making an amazing instant pot roast for your household!

For more help making a great pot roast, check out these posts:

What Is The Best Potato For Pot Roast?

Does Pizza Go Bad If Left Out Overnight?

At What Temperature To Bake Nachos