A juicy, fall-off-the-fork pot roast is the ultimate crowd-pleasing comfort food after a long day. But what is the best beef to use for a tender, mouth-watering chunk of meat? We've sliced into the research and have some beefy answers for you!

The three prime cuts of beef for a pot roast are chuck, bottom round, and brisket. A boneless chuck has a rich taste and is easy to shred. The bottom round is a lean cut that's great for slicing. Finally, a fatty piece of brisket makes for superb next-day sandwiches!

So, why exactly are these cuts the preferred choices? What is the difference between pot roast and roast beef? Can you overcook a pot roast? Keep reading for a hefty portion of meaty tips on preparing your perfect pot roast dinner! 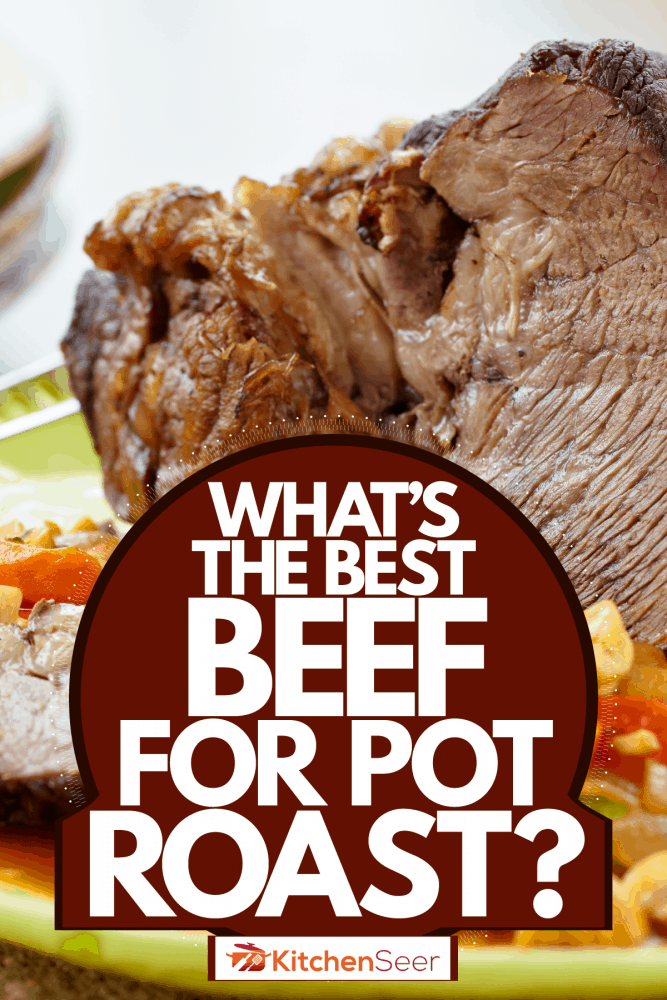 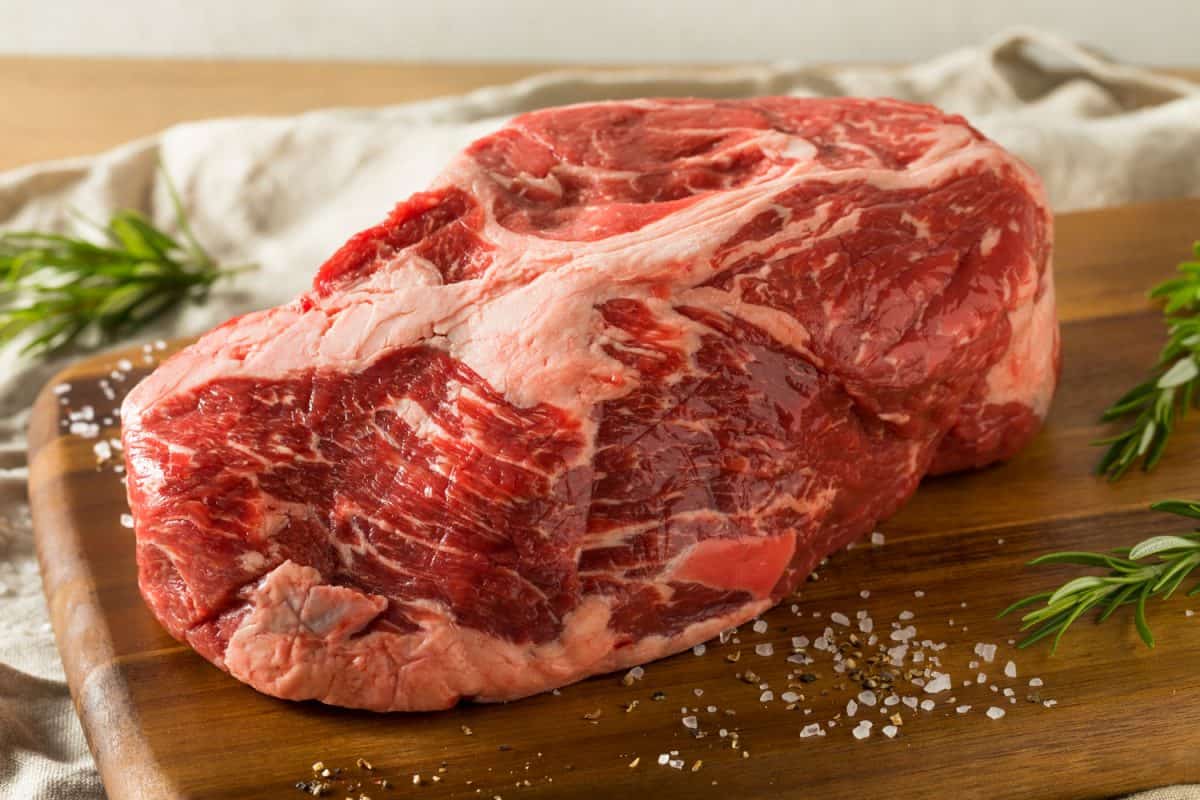 A boneless chuck roast cut is arguably the quintessential beef for roasting. They come from the shoulder and neck area of the cow. It's super fatty, which gives chuck the richest natural flavoring of the cuts most commonly used. Cooked properly, it will easily shred into bite-size pieces.

If you're looking for that tender, fall apart consistency, this is the one you want! However, keep in mind that it is higher in saturated fat and is not the best selection if you want to serve in slices. Visit Food Network's website for a Perfect Pot Roast tutorial using a chuck cut. 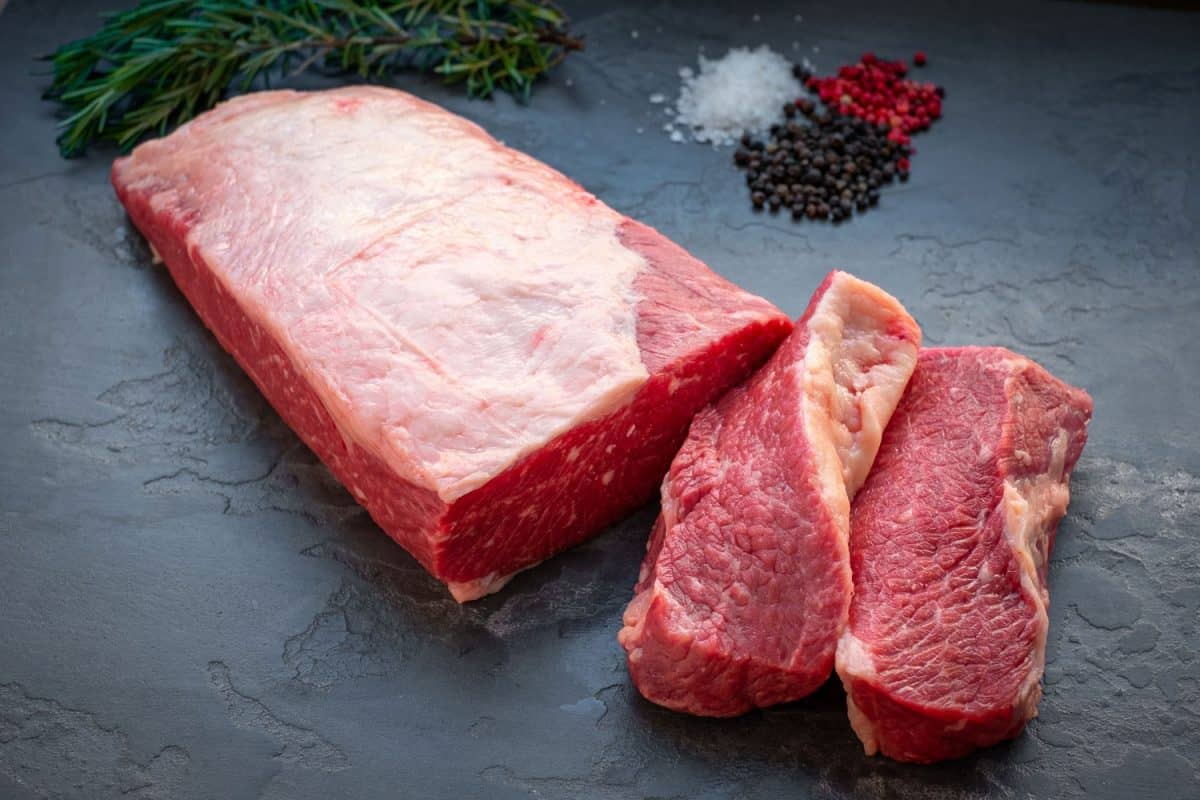 Although typically regarded as smoked barbeque meat, beef brisket also makes a yummy pot roast. This cut is flat and quite wide, with most of the fat located on one side. It originates from the cow's chest area. So, while it is leaner than the chuck, it still contains plenty of fattiness.

Brisket is good for slicing- which you should do against the grain for the tastiest results. This also means it's perfect for slapping together sandwiches with any leftovers! The biggest drawback here is the price tag- especially compared to chuck and round. This drool-worthy Beef Brisket Pot Roast from Simply Recipes utilizes a brisket cut. 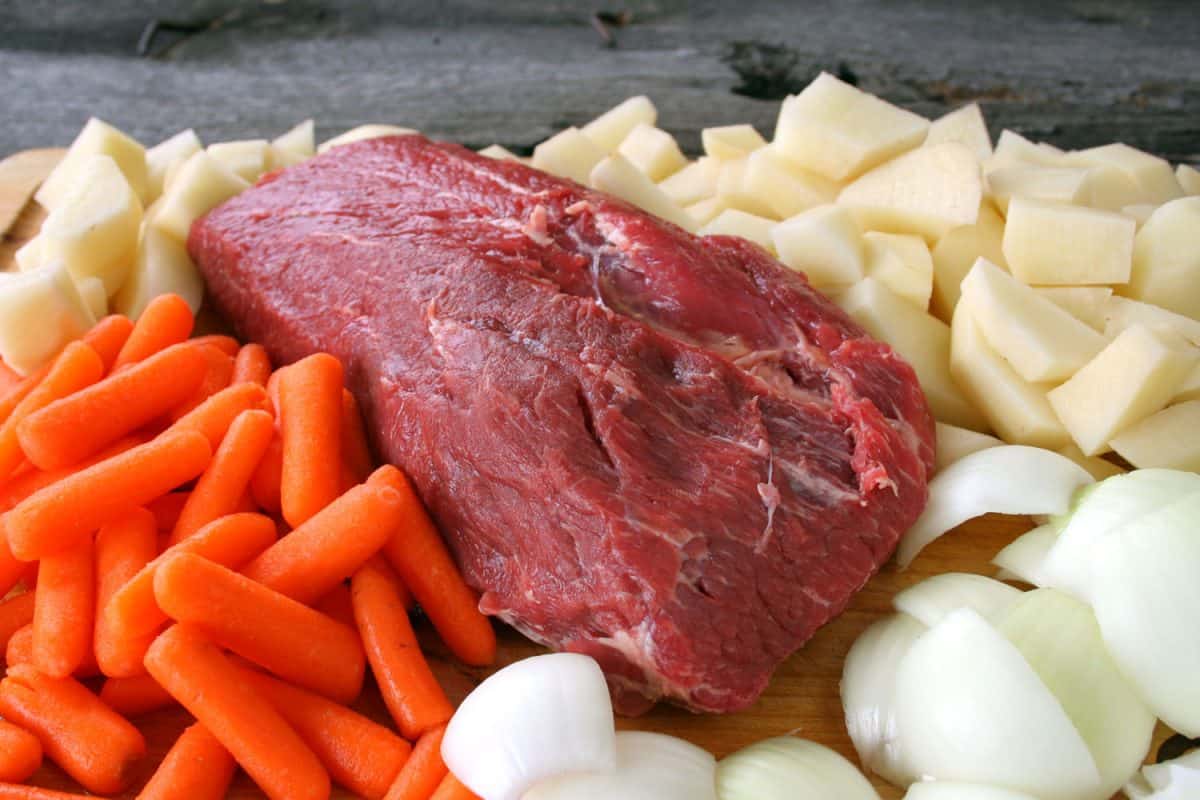 Taken from the rear area of the cow, the bottom round or rump roast is the leanest cut of the three. Because the grain is so fine, this is the cut most suitable for segmenting into slices. While it can make an enjoyable roast, you may want to add in some extra fat content or juices to prevent it from drying out. Rump roast is very susceptible to overcooking due to the lack of fattiness.

Of course, it also gets bonus points for being cheaper than brisket! Head over to All Recipes to see a flavorful Bottom Round Roast recipe highlighting the rump roast cut.

What is the difference between pot roast and roast beef?

Some people refer to pot roast and roast beef as the same meal. However, they are actually two different cooking methods. Roast beef is normally used in making sandwiches. It is cooked dry in an oven. 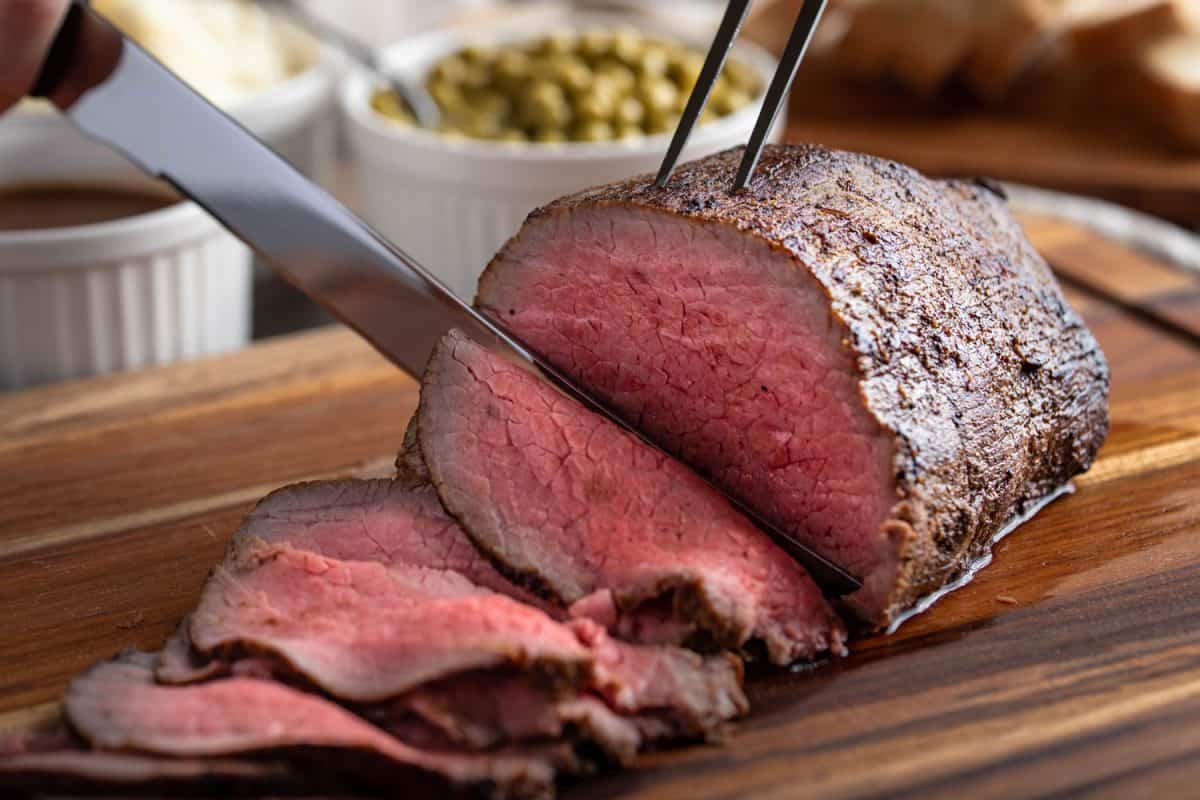 A pot roast, on the other hand, is prepared in a liquid of some sort. This could be broth, stock, wine, or even just water. 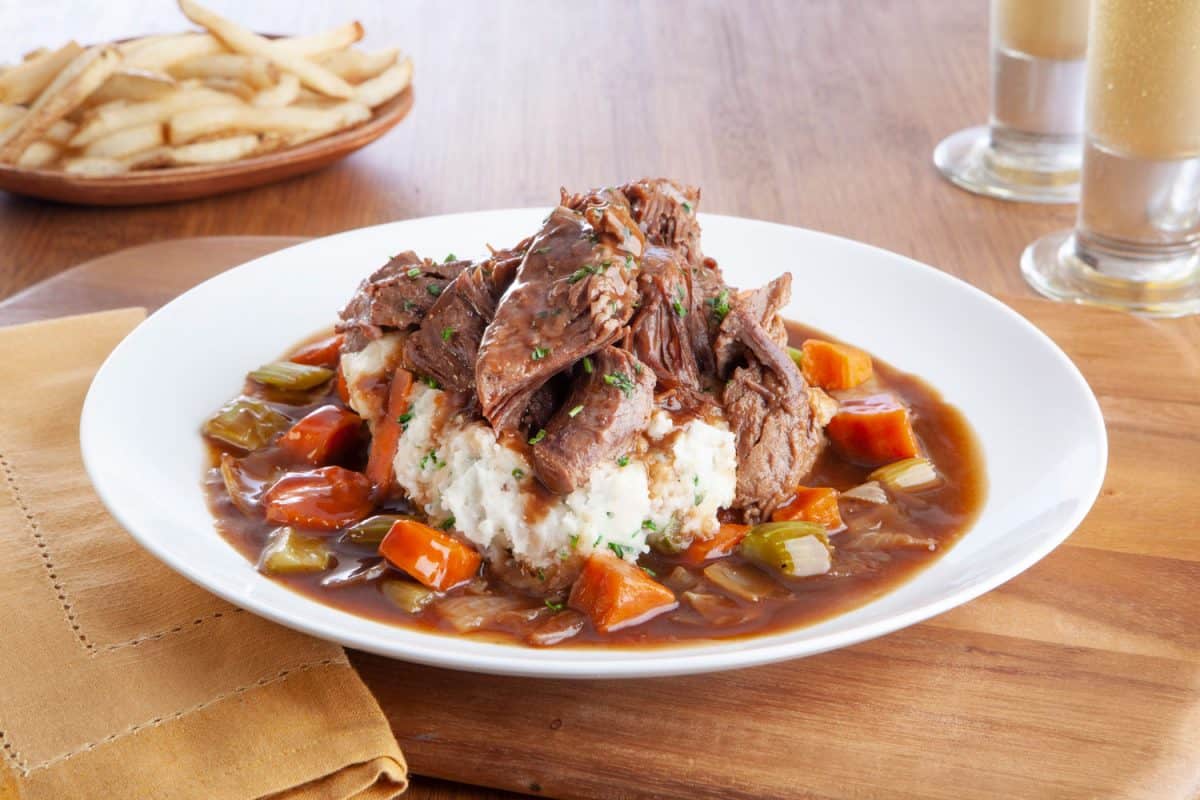 Does pot roast get more tender the longer it cooks? 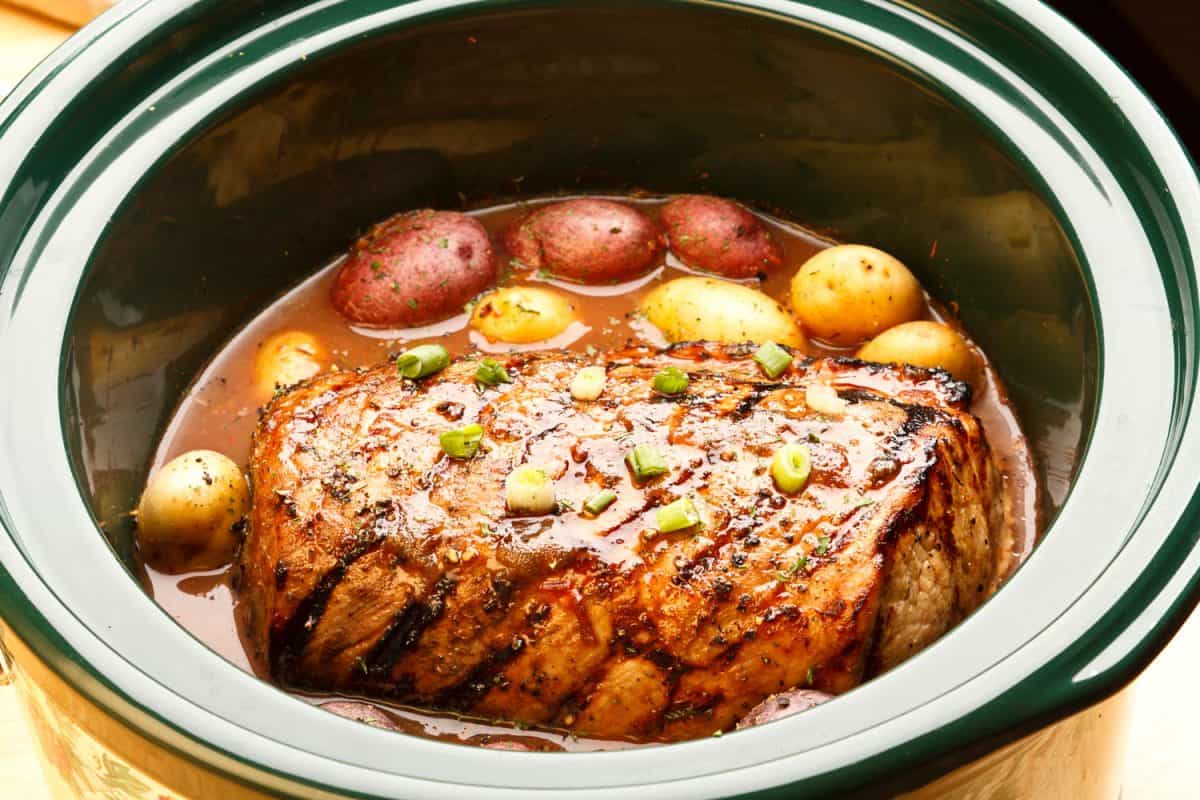 One of the qualities of a pot roast that makes it such a popular technique is the ability of the meat to get more tender as it cooks. The whole point is to let it go low and slow. This way, the fat and connective tissues slowly break down over time, flavoring and tenderizing the beef. The moisture content from the cooking liquid will also absorb into the beef for a juicy result. It's not uncommon, especially in a slow cooker, to let the roast simmer for eight hours for ultimate tenderization!

Can you overcook a pot roast? 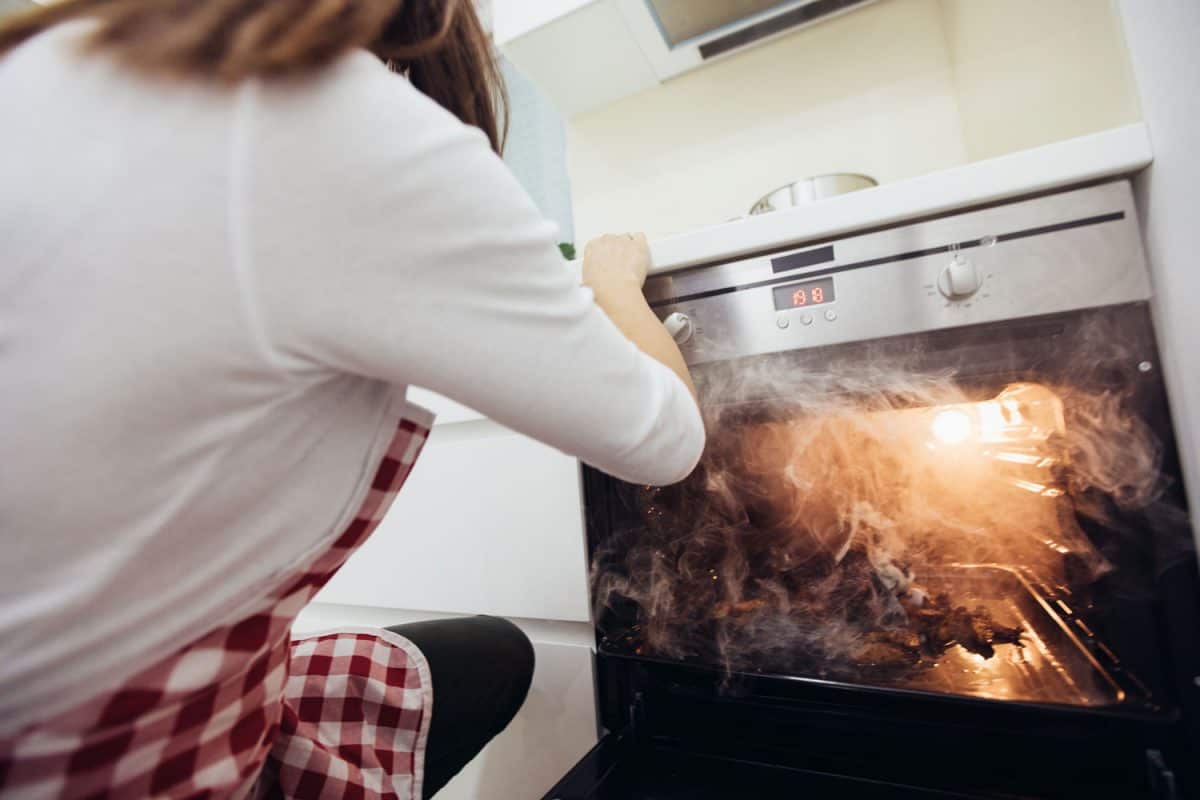 As with pretty much any prepared food, it is entirely possible to overcook a pot roast. It's also easy to do if you don't take precautions. Normally, this only happens for a couple of reasons:

First, you might have raised the heat too high. If using an oven method, stick to the 200- to 300-degree temperature range. For slow cookers, use the low setting.

Alternatively, you could have run low on liquid. Remember, you need a decent amount of wet elements to prevent the meat from drying out. This is crucial to success.

Does a pot roast need to be covered in liquid? 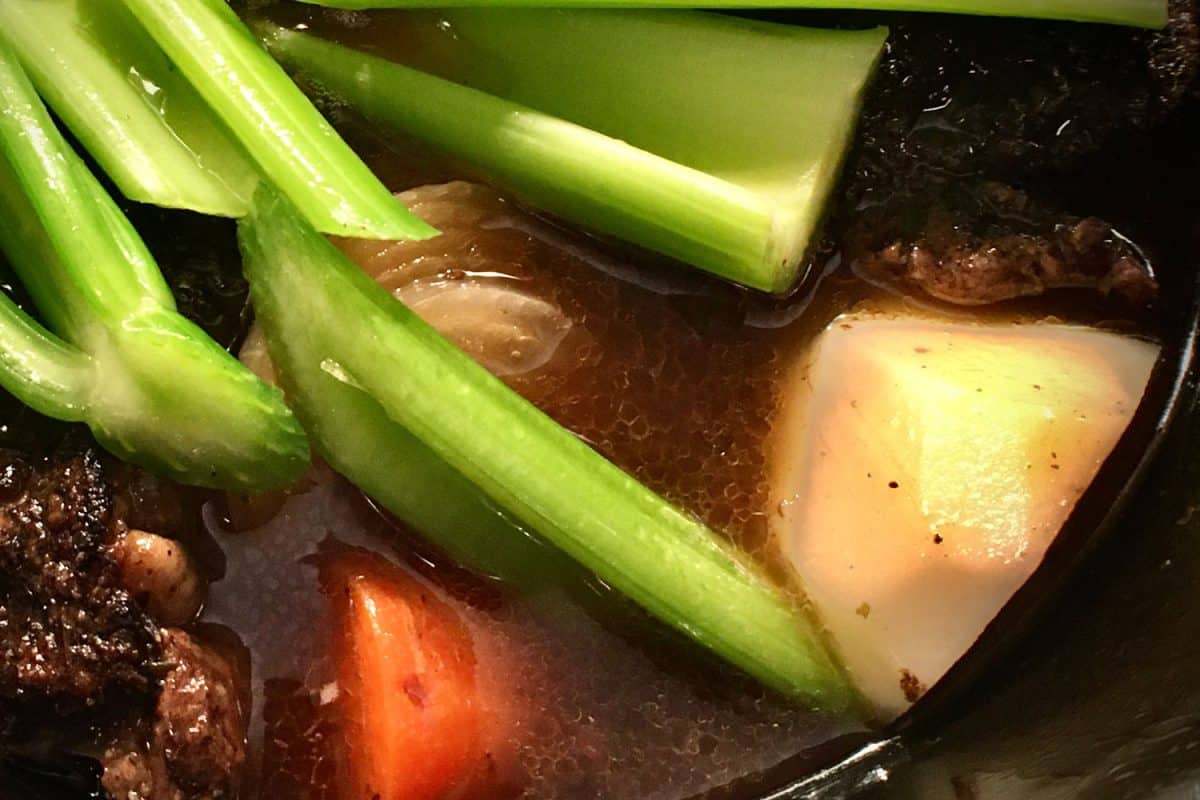 While a liquid is a vital component of an outstanding pot roast, it does not have to be saturated or submerged. Most recipes will call for 1/4 to two cups for the average-sized portion. This is especially true if you're using a slow cooker because they are designed to retain all that moisture. The meat and veggies will also supply a small amount of their own juices during the cooking process.

Is it better to cook a roast in the oven or crockpot?

Whether you prepare your roast in the oven or a crockpot really comes down to personal preference.

If you're heading to work for the day, a crockpot or slow cooker is a wonderful choice. For example, if you have a gas oven, it's hard to justify leaving it on while you're away. With a slow cooker, you don't have to worry as much about safety hazards. You can throw the ingredients together, place the pot on the low setting, and leave it on safely all day. Now dinner is ready when you arrive home!

However, some hold the opinion that oven preparation gives the roast a deep, rustic flavor that slow cookers do not. To be honest, a seasoned cast-iron dutch oven is hard to beat! So, if you're going to be home- or simply want it done faster- the oven method may be for you.

Do you cook pot roast covered or uncovered? 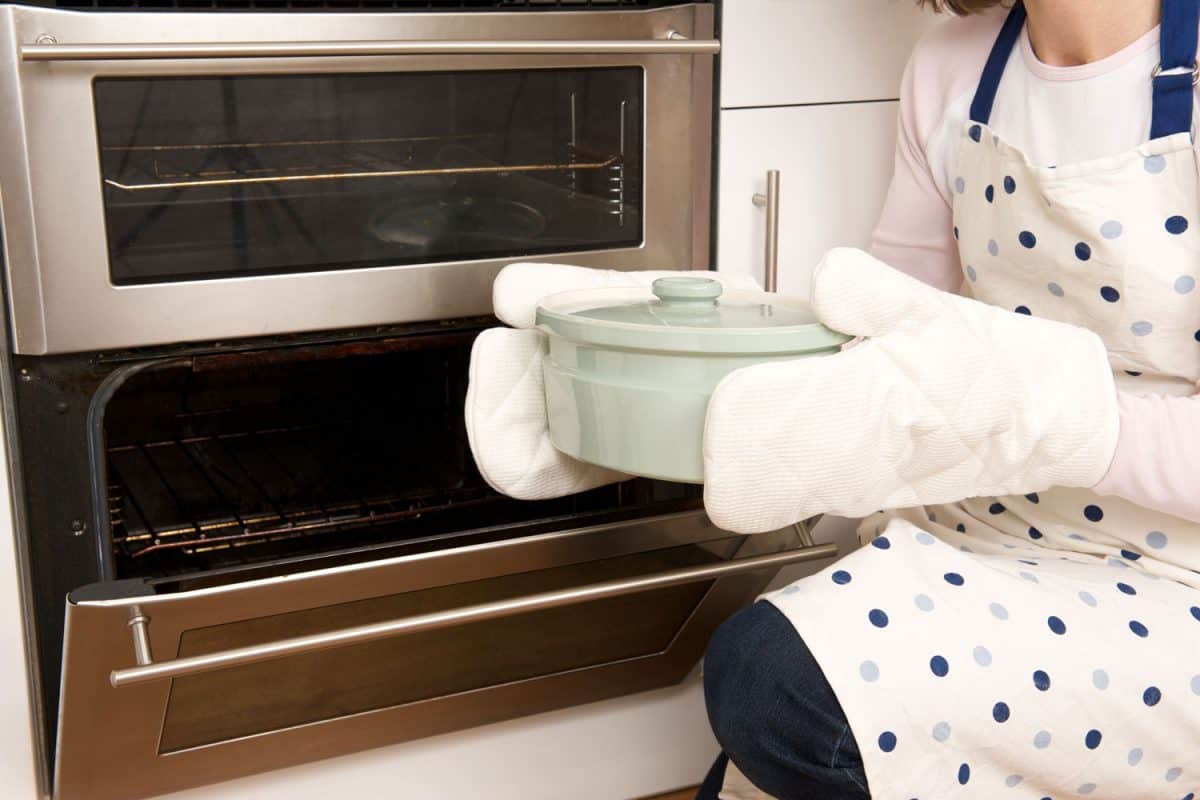 For best results, your pot roast should be covered while cooking. Doing so will help in heat retention. It will also preserve much-needed moisture so your dinner comes out tender and juicy. If you're using a baking dish that doesn't include a lid, aluminum foil works great, too. Plus, it's cheap!

Do you have to brown a pot roast before cooking? 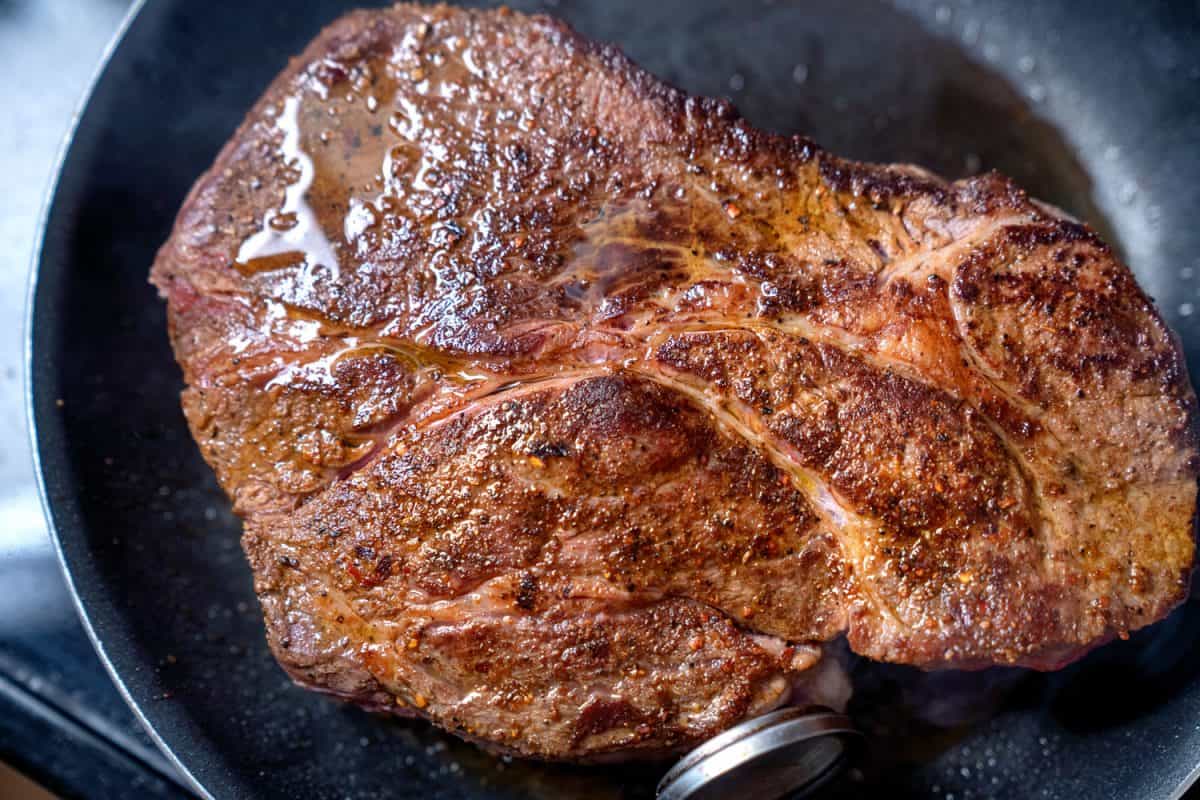 While not required, browning your pot roast before cooking will definitely add an extra oomph of flavor. Firstly, this offers an opportunity to both pre-season and boost fat content via vegetable oil. Or, if you're really feeling bold, sear it in butter or bacon grease. Seriously- bacon makes everything better!

Exposure to high heat will caramelize the proteins and sugars in a process known as the Maillard reaction. This action adds a whole new depth in both texture and taste. It also makes the finished product look better aesthetically.

In our opinion, it's worth the tiny bit of additional time and effort in the end. After all, it's only one pan and maybe ten minutes of work! 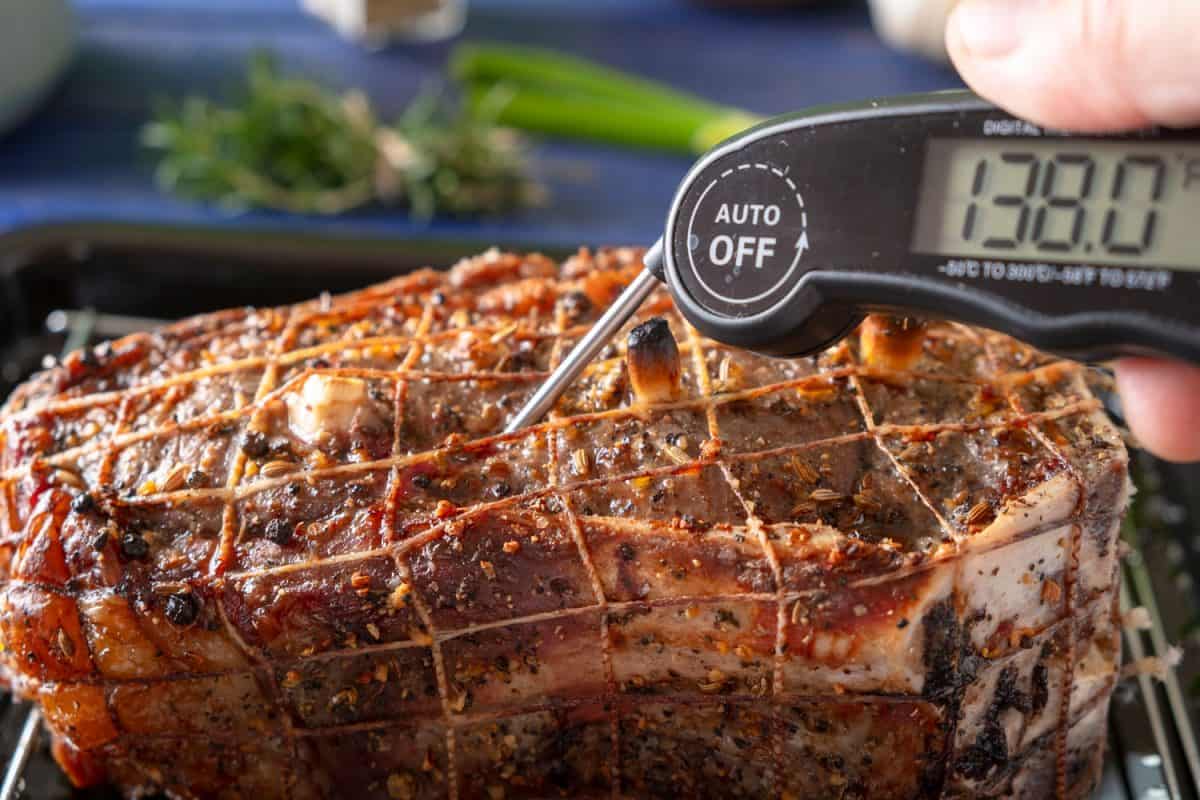 Stick a meat thermometer in us because we're all cooked!

We've established that the best beef cuts for pot roast are chuck, brisket, and rump. Remember that although roasts get more tender as they simmer, you can still overcook them if you're not careful. For yummy results, brown the meat first and use the exact amount of liquid specified in your recipe. Whether you stick it in the oven or toss it in the crockpot, you're going to have a satisfying dinner!

What Potatoes Are Best For Stews And Soups? [6 Excellent Options]

Can You Leave A Meat Thermometer In The Meat While It’s Cooking?

How Long Does Pizza Dough Last In The Fridge? [Homemade and Store Bought]