The potato is one vegetable that seems to last a lot longer than others in our kitchens. These rugged tubers can be plucked from the ground and safely stored for several weeks in your pantry or several months in cold storage. At some point, you've probably grabbed one for cooking, only to find that it has some significant soft or green spots.  Are the potatoes safe to eat when they are soft or green? We've researched potatoes from numerous food safety sites and have our findings presented throughout this post.

Potatoes should not be eaten if they are mushy under the skin or have noticeable green spots. Excessive softness indicates rot and decay, meaning you're better off tossing that one aside. Any green color means that the potato has an increased amount of solanine, which is toxic.

Now that we know what you should avoid when selecting a potato for cooking, we'll go into more detail about why discarding or cutting away these spots is necessary. You might also be wondering if there are other signs that a potato has gone bad or what you can do with old potatoes. To see what we've discovered, read ahead in this post. 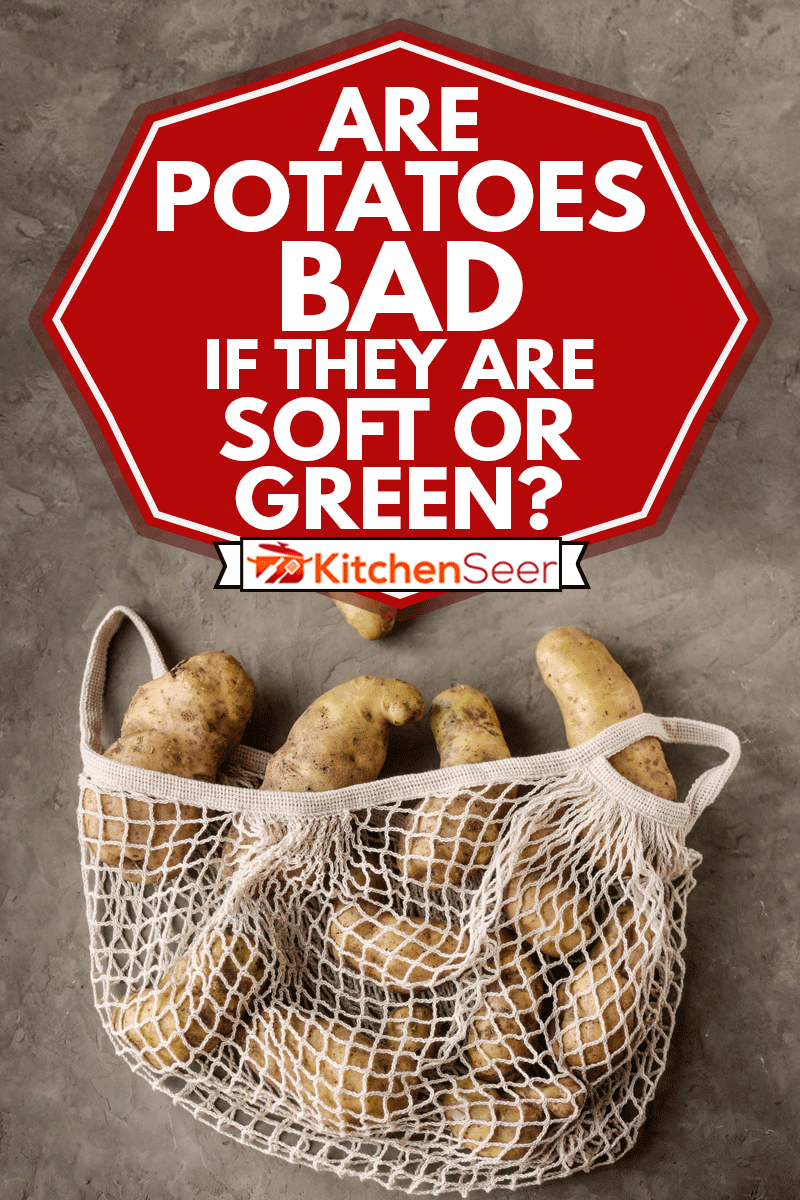 Before You Decide To Go Ahead And Eat That Potato

Just how soft is too soft? And how green is too green? If you normally have potatoes in your kitchen, you've probably been tempted to use potatoes with the above-mentioned issues, or maybe you've just tossed them out entirely. This section of this post will discuss when it's definitely not worth it to save that spud.

Experts state that the best potatoes are firm, with skin that doesn't show any wrinkling. However, if your potato has a spot or two that is just a little softer than others, you don't necessarily have to toss out the entire potato. If you're peeling the potato, you will soon see the extent of what the softness has done to it. If it's an isolated spot, you can harmlessly cut it out and discard it while using the rest of the potato. But if your potato is mushy or smells rotten, it's best to toss the entire thing out and grab another one.

When you keep your potatoes in a warm area that gets a little bit of sun, they prepare to begin sprouting. In order for this to happen, the potatoes will use the sunlight to produce chlorophyll. While chlorophyll itself isn't toxic, this chemical's presence will make the potato produce an additional chemical called solanine. Solanine is a neurotoxin, and consuming enough of it will cause a person to become ill. In extreme cases, it's been known to lead to death.

If your potatoes have sprouted at all, these sprouts contain solanine. You can safely cut the sprouts off and still use the potato with no issues. And if you should notice any green spots on the potato, you should cut them out before cooking it. Contrary to what you might have heard, solanine isn't killed or neutralized with cooking heat. Should the majority of the potato be green, go ahead and discard it.

How Do You Know If A Potato Has Gone Bad?

You can usually tell if your potato should be discarded by inspecting the surface of the tuber. As we noted earlier in this post, potatoes that are too soft, or have mushy spots, are probably beyond saving and should be tossed. Likewise, potatoes having an excessive number of green spots should be discarded.

As potatoes age, they can lose moisture. If the potatoes your considering cooking are wrinkled, have loose or cracked skin, and seem almost brittle to the touch, then they aren't ones you want to consume.

You can often tell by the smell alone if a potato is well past its useful consumption date. Potatoes that smell of rot or mildew should be immediately removed.

While it's ok to remove some sprout growth from potatoes that have been stored, you'll want to avoid cooking potatoes that have a lot of it. A few sprouts here and there on a potato can be safely removed, leaving you with a perfectly good spud. But if there seems to be more sprout than potato, you might want to put it in the compost instead of the cooking pot.

Can You Get Sick From Eating Bad Potatoes?

Any food that is spoiled or rotten is capable of causing illness if consumed. Potatoes are no exception to this.

As we discussed earlier, green spots on potatoes indicate a higher level of solanine than is safe for humans to consume. Solanine is a neurotoxin, which will attack the body's central nervous system. This chemical is usually only present in small amounts, but a full potato's worth of it will make a full-grown adult sick. Children are especially susceptible to solanine.

Excessive amounts of solanine will make a person suffer from nausea, headaches, and other physical symptoms. Too much solanine can even lead to death, although this is rare. To be on the safe side, it's best to follow the food safety guidelines and avoid eating rotten or green potatoes.

What Can You Do With Old, Soft Potatoes?

What if you've forgotten a bag of potatoes and have found upon rediscovery that they're all beyond use in the kitchen? Should you just toss them in the garbage?

While spoiled potatoes shouldn't be eaten, there are still several useful purposes they can serve. Consider cutting them up and adding them to your compost. Potatoes biodegrade quickly and add lots of needed nutrients to compost heaps. You can also take these old spuds that have sprouted and replant them in your garden. This will allow for a new crop of potatoes to emerge.

How Do You Increase The Shelf Life Of A Potato?

If you plan to use the potatoes you just purchased from the grocery store in the next several days, storing them isn't an issue; most of the time, a potato will not rot or sprout in this amount of time.

Potatoes crave warmth and sunlight to grow. If you are storing potatoes in a place where they get both, they will sprout quicker. This sprouting means that chlorophyll and solanine are present, the latter being toxic to humans. To avoid this from happening, find a cool, dry spot to store your potatoes. The crisper drawer of a refrigerator will work, and many stand-alone veggie storage bins will work perfectly.

Potatoes remain a popular mealtime staple in countries across the world. Like any perishable item, potatoes will not keep safely forever. Knowing what to look for when you inspect your potatoes before cooking can save you from a serious illness. Properly storing potatoes will make them last longer prior to cooking. Keep them in a cool place, away from sunlight, to make them last the longest.

Potatoes that are too soft or green should not be consumed but can still provide a useful addition to your garden. Replanting sprouted potatoes will cause new ones to grow. And rotten ones can still be used in compost.

If you've found this post on potatoes to be useful, we recommend you read the following posts:

Can You Brown Vegan Butter? [What You Need To Know]

How Big Is A Tomato?